At HHHunt Communities, we’ve always been attracted to developing communities with deep historical roots. We take care to honor the legacy of the lands and grounds on which we build and Rutland was no exception. 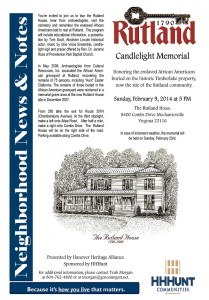 In 2006, before Rutland became the award-winning community we know and love today, a group called Cultural Resources Inc. conducted an excavation on the site that uncovered the remains of 75 African Americans who had been enslaved on the property. From the moment of that discovery, we knew this was a legacy we needed to preserve, protect and honor. When we moved the historic Rutland House, which was owned by the Timberlake family and once served as a headquarters building for Gen. J.E.B. Stuart during the Civil War, we reinterred the uncovered remains in a special grave site nearby.

On Feb. 9, HHHunt Communities along with the Hanover Heritage Alliance, will be hosting an event at Rutland to honor the enslaved African Americans buried on the historic Timberlake property. Please join us at 5 p.m. to hear music by One Voice Ensemble, an interracial choir dedicated to tearing down racial divisions through music. You will also be given the opportunity to tour the Rutland House, hear from archaeologists, visit the cemetery and participate in a candlelight vigil and prayer led by Dr. Jerome Ross of Providence Park Baptist Church. Thank you for helping us preserve the memory of those buried at Rutland and keeping our shared history alive.